I'm in the mood for sharing... here's another very short piece originally written for a 250 word short story competition.


He tells me he’s the only one for me, and that I need look no further. I admit to feeling the same way. It was love at first sight, impulsive and headlong.
But he won’t help with the dishes or take out the garbage­­­—that’s not his style. I can’t complain since he doesn’t drink or smoke and plainly adores me. We’re so in tune with one another. Most of the time I know what he’s thinking. Our life together is simple. He doesn’t ask for a lot.
My parents disapprove. They say I’ll outgrow him, that my needs are different, that he’ll be a burden. Look at him, they whisper to me in the hallway when he’s sitting in the sun goofing off, he’s such a responsibility. See, he’s a homebody, pottering around the yard, sometimes even gardening. I bring home the bacon. But hey, it works for me. And I disagree about my needs; we have things in common. We love good food, rambling in the hills, cuddling. He’s so appreciative. He doesn’t read voraciously like I do, but he isn’t stupid. We’re intelligent in different ways. At first our differences were more pronounced, and I admit to shouting at him heaps. I feel bad about that now.
The bottom line is I’m overjoyed to see him when I come home. I get all churned-up. I know he does. He’s over the moon. I just wish he wouldn’t jump on me so much. 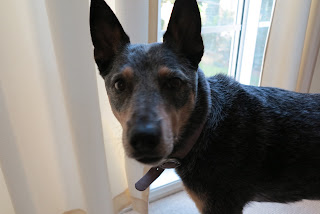