Last Wednesday I went to my skin specialist. I’ve been going to the same skin specialist for almost ten years. Early on in the ten years I mentioned a rough patch of skin on my right temple that had been burnt off by my GP some years previously, but appeared to have grown back. She examined it and said she was fairly sure it was a BCC. She took a scraping, as she calls it, sent it off for analysis and said it would probably have to be excised. Which it eventually was. And because it had grown to almost the size of a five cent piece, I needed the expertise of a plastic surgeon. However, all that is another story and perhaps more relevant to a medical journal. 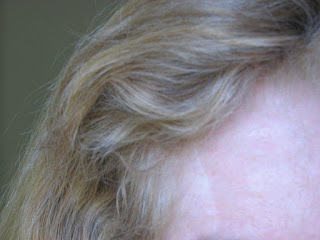 The point is that every year I make the pilgrimage to my skin specialist. Once there was another very tiny BCC under my right eye which meant another visit to the plastic surgeon. My skin specialist, her name is Megan, occasionally finds small sun-spots – which she did on Wednesday, two on my right arm – and burns them off. On Wednesday she also found the small beginnings of a BCC on my right shoulder and removed it then and there using a local anaesthetic. 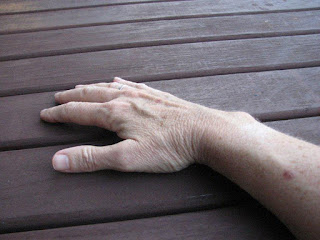 In order for her to examine me, I strip down to my knickers and bra. I start by sitting on the edge of the bed while she checks my legs and arms and face, and then I lie down and she does my back, and then I turn over and she examines my stomach and upper legs. She wears some headgear with what I presume is a powerful microscope attached to it, and as she goes over my body she touches me with one hand. She uses her hand as a guide, to ensure that she travels over every inch of skin. Because I’ve known her for quite some time now, and because she’s a (lovely) woman, I’m perfectly comfortable with this arrangement. 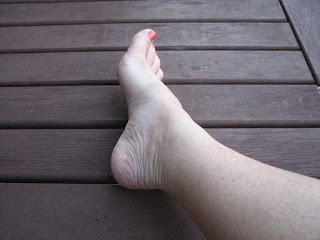 However, on Wednesday, while she was working I started thinking about what an odd relationship it is. It’s so intimate – me in my undies, her touching me – and yet there’s nothing between us. 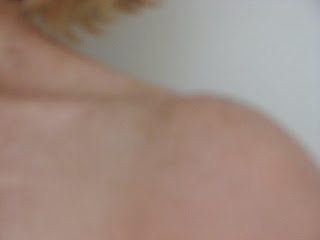 And I started thinking about what if there was something between us, and how I could turn this scenario into a short story.

On Thursday I got down some sentences. Between Saturday and Sunday I wrote the first draft.  Oh, and I should probably mention that for the remainder of Wednesday, and on Friday too, obviously, I was mulling it over. I’m a great believer in percolation.

At the moment, the draft is a one-page short story. Flash Fiction. That may change.  In order for the story to grow to more than a one-pager, however, I feel that it needs something more, which I haven’t got. Yet. This is not to say that I am unhappy with it in its present form; I’m not. I think it stands alone quite nicely by itself.

I have to say, too, that on the weekend I finished reading Lolita.  I admit that has influenced the work to a certain degree. As an aside, I admit, too, that by the time I was halfway through Lolita, I was quite bored with Humbert Humbert and his antics.  Although nothing, nothing, comes close to the seduction of the first paragraphs of Lolita.  As far as I am concerned the book could stand alone on those first paragraphs.

Because I’ve now been trained (thank you, QUT, I miss you already) to investigate and explore how my creative side functions, which up until now I’ve ignored, this is my attempt to document the process.

P.S. You can go here now to read the finished short short story.