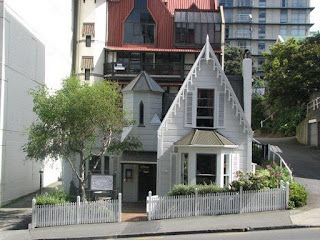 That’s Wellington, New Zealand, to avoid confusion with numerous other Wellingtons all over the globe. (Clearly he was a popular guy.)  I’ve just spent four days there. Some things you should know about Wellington:
It’s very pretty; 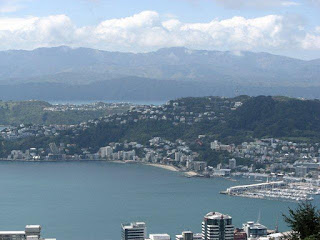 It has a humungous number of coffee shops; 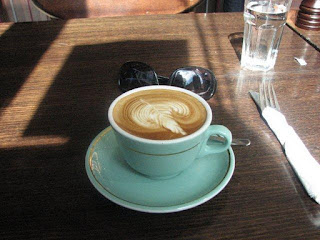 It has some lovely pubs, St Johns being one of my favourites, where of course you can get a glass of New Zealand's finest Sauvignon Blanc or a glass of locally brewed beer; 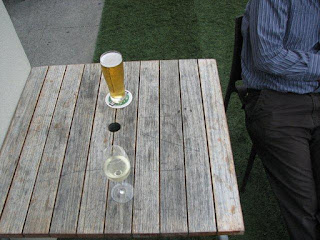 It blows a lot, although it blew very little while I was there.  But there are no pictures of umbrellas turning inside out, or Wellingtonians being blown hither and thither. Although the clouds above did scud past at an alarming rate.
I think what attracts me about Wellington’s architecture is its cleanness and whiteness.  Maybe it looks especially white because the skies are very often grey and it makes for a lovely contrast. Maybe I particularly like Wellington’s architecture because much of it is Gothic. 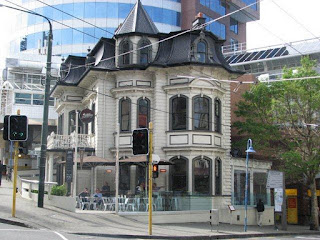 I also love being so close to the sea. 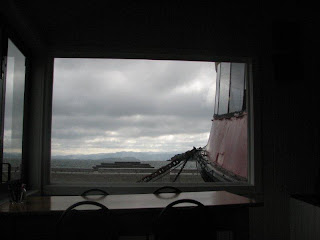 This morning, when I left for the airport in the near-dark, it was raining.  And when the plane took off it was a matter of seconds before we were clouded in cotton-wool, which was disappointing because there’s usually something worth looking at out of a plane window.  But I was lucky. The clouds lifted when we were somewhere near the South Island and islets of dark green anchored in the slate grey sea drifted below. You’ll have to use your imagination; there wasn’t time to reach for the camera.
Posted by K W George at 20:19