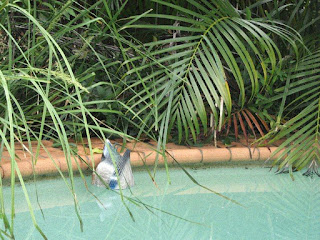 This is a picture of my new friend, Miss Puddleduck.  I haven’t made eye contact to introduce myself, because every time I go out there she’s bottoms up.  I’ve called her Miss Puddleduck after Beatrix Potter’s Jemima Puddle-Duck, whom I seem to remember was a bit naïve and let a fox get the better of her.  I don’t think my Jemima is naïve.  Although it’s possible I am. 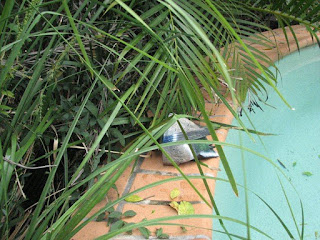 When I haven’t been concentrating on my assignments, I’ve been doing some thinking about the imagination and the blurring of the lines between reality and fiction.  This is because the new book – yes, I’ve started a new book – is about a little girl who has an imaginary friend. I need to do research and a lot of percolating, before I write any more. Apparently, children can have three categories of imaginary friends: imaginary friends who are only seen in the mind, imaginary friends who aren’t seen but their presence is felt, and imaginary friends who are all too real to the child.
As part of my research I’ve bought the Tenant of Wildfell Hall and Jane Eyre by the Bronté sisters. I’m ashamed to say I haven't read either book, and I hope they’ll go a long way towards immersing myself in gothic writing. I’ve just read Bereft by Chris Womersley, which is described on the backcover blurb as a “searing gothic novel of love, longing and justice” and I believe that the little girl in that novel, Sadie, is very likely a figment of the main character’s imagination.  It’s not common, however, for adults to have imaginary friends.
I know some adults who converse with inanimate objects –  soft toys, sculptures – as if they were alive, but I don’t know anyone who’s ever had an imaginary friend as a child. I don’t think it’s something many grown-ups would admit to and, if they did, I think they would be sheepish. I’d like to know if the adults who talk to inanimate objects imagine they get a response, and how the response is formed. Do they know it emanates from their imaginations? Are they sometimes surprised by the response? Is the inanimate object’s response predictable?
I know that my imagination can be headstrong. That if I want something to happen very badly I almost believe that it has, and I am quite devastated when someone points out that it hasn’t. I can develop expectations around this one hope, so much so that it becomes a part of my history when, in actual fact, it hasn’t even happened. Yet.
Posted by K W George at 21:46